Here’s your question today: Sweeteners made with stevia, like Stevia In the Raw, Pure Via, Organic Stevia and Truvia, are a healthy natural way to sweeten your foods and drinks. 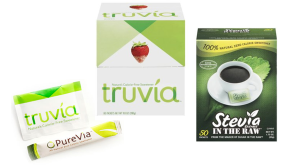 Whole leaf stevia, in its natural form, is an herb that has zero calories, it is a whole food that comes directly (in-tact) from nature. You could call this the sweetest plant on earth. In fact, its sweetness is about 12-15 times more potent than table sugar. 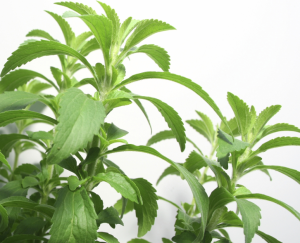 Stevia owes its sweet, licorice-like flavor to compounds called glycosides. Stevia contains eight different glycosides, the sweetest of which is stevioside. There have been at least 100 other active compounds, phytonutrients and volatile oils identified within this herb.

Remember, when you are eating plants and herbs, you aren’t just eating a calorie, or protein or fat… your are eating hundreds and thousands of phytonutrients and bioactive compounds within these plants that work synergistically to support your health.

If you are looking for a safe, natural substitute for table sugar, stevia the herb is an option. But here’s the kicker, when stevia leafs are dried and ground into a powder, the consistency has a slight resemblance to powdered sugar. It doesn’t mix well in cold or hot fluids, which is why it is a more difficult sweetener to market to consumers.

Since stevia the herb isn’t as user friendly in the kitchen, companies have quickly jumped at the chance to produce products that are being marketed as stevia. Stevia In the Raw, Pure Via, Organic Stevia and Truvia are all examples of products who claim to be made with stevia. These new product are offered in a crystalline form, similar to sugar and salt – which dissolve easily into both cold and hot beverages.

For the example today I am going to use Truvia, probably one of the better known stevia containing products. Clever branding and marketing has tricked many health conscious consumers into believing that Truvia, A. comes from nature, and B. is stevia, and C. is good for you.

Before I talk more about Truvia, I first want to talk about Cheez Whiz (bear with me). Cheez Whiz ‘the original cheese dip,’ is able to use the name ‘cheese’ on its label because it contains cheese. Since its conception in the fifties, Cheez Whiz listed ‘cheese’ at the very end of the ingredient list; just enough is present for Kraft to be able to use the word ‘cheese’ in their tagline. In 2013, they stopped listing ‘cheese’ on the ingredients list and now list the cheese derivatives in the latest reformulated product (like ‘milk solids’), so alas, there is no longer ‘cheese’ listed on the Cheez Whiz label. It only contains a fraction of real cheese. Where am I going with this? Dare I say that Truvia is the Cheez Whiz of sweeteners?

↑ Tweet This
Here is the quote directly from the package of Truvia: “Truvia sweetener comes from nature. Rebiana comes from the sweet leaf of the stevia plant, native to South America. Dried stevia leaves are steeped in water, similar to making tea. This unlocks the best tasting part of the leaf which is then purified to provide a calorie-free sweet taste.” 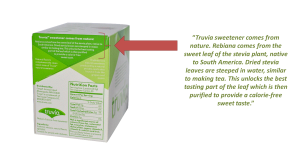 There isn’t any stevia leaf in Truvia. There is a compound called rebaudioside A (a stevia extract) that undergoes a 40 step chemical process that includes the use of chemicals like acetone, methanol, ethanol, acetonitrile, and isopropanol to become rebaudioside A (this is also called Rebiana, or Reb A). I do believe that this 40 step chemical process is being referred to with the word “PURIFIED” in their marketing statement)
Now, here’s the kicker. Only half of one percent of Truvia is Rebiana. The rest is erythritol, which is a sugar alcohol. So, Truvia is basically erythritol with a half percent of Rebiana so the marketing can scream that this is from an all-natural source, the stevia plant.

Whole leaf stevia, in its natural form, is an herb that has zero calories, is a whole food and comes directly (in-tact) from nature. Has the FDA approved the use of stevia, the herb, from the plant, the actual leaf, this whole food, as a sweetener in our food supply? “The FDA has not permitted the use of whole-leaf stevia or crude stevia extracts because these substances have not been approved for use as a food additive.” 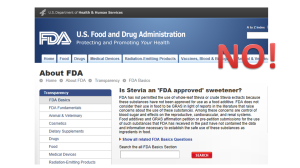 Has the FDA approved Rebaudioside A? You betcha! It has attained GRAS status ‘Generally Recognized As Safe.’ Let’s break this down: Whole leaf stevia is an herb in its natural form and is not considered safe by the FDA. Rebaudioside A has undergone a 40 step chemical process that includes known carcinogens like acetone, methanol, ethanol, acetonitrile, and isopropanol… and this IS approved by the FDA with GRAS status. 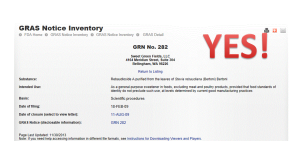 If you need to sweeten something, go to the source and use honey, real maple syrup or whole leaf stevia. You can actually buy a stevia plant for your garden and steep the leaves into your tea! If you do opt for a stevia product, the only thing that should be listed on the label is ‘whole leaf stevia’ and not rebaudioside A, Rebiana or Reb A.

There is one more important point that I would like to make here. Truvia, as well as the other brands that offer this type of sweetener like Stevia In the Raw, Pure Via and Organic Stevia, is marketing deception at its finest. These are not natural, pure, healthy, clean or wholesome, nor do they contain a single spec of whole leaf stevia and yet this is what the marketing screams out at the consumer. Most people would think that they are doing a very good thing by using these processed products and they are clearly not. This is why we all have to remain diligent about the foods that we put into our body and continue to question everything that is not in its true natural state.

Hi,I was diagnosed with M.S. in 2006 and the seuirzes I had as a child came back. I think the M.S. was due to the aspartame laden drinks (diet cokes, ensure) I drank in the 1980s and 1990s. I only learned about aspartame from Dr. Betty Martini 4 years ago. Not only is aspartame very deadly, msg is as well. I also learned about the dangers of aspartame from Dr. Stan Moneith on Radio Liberty. So now, I have health issues I never had before. Do I think it is from sugar well duh fake or real, sugar is not good for us.

"My husband and I are both in the fitness business and have encouraged our clients to eat healthy for years. We decided to practice what we preach and ..."

"I have been a vegetarian for over 20 years. Last year I participated in the 28 day challenge. It changed my life in so many ways. Not only did I los..."

"I finally joined the Clean & Lean System and it has been pretty incredible. I’m no longer as exhausted as I used to be, and I had gotten used to think..."

"If you want to be healthy and more energetic, you need to do this program...."

"I am down 24 pounds and counting! I am losing more inches than anything. I am back to be pre-baby weight (pre first child baby weight!) and couldn’t b..."

"This is the most thought provoking, ah-hah program that I have ever done. I get it now. Oh, and in addition to feeling fantastic, my skin is glowing,..."

"Angela, I just had to say THANK YOU! The information you are providing here is simply phenomenal. You changed my life in a month, and I am in awe of a..."

"I haven’t felt this much energy in years. I am shocked at how much clearer my mind is and how great my skin looks. I keep getting compliments and it h..."

"This program has reacquainted me with food and my relationship to it. Really a great experience. I’m feeling better and am sleeping a ton better. I lo..."

"This program is AMAZING! I highly recommend it for anyone who wants to learn how to stop dieting and feel better in their skin. I had been moving from..."

"I just wanted to first say thank you Angela for this program! I definitely think I’m on the right track! I’ve lost 10 pounds and 7 inches from my wais..."

"Angela at Clean and Lean revolution has taken the time and attention to create a WONDERFUL healthy eating plan. It is so simple and full of fantastic ..."

"Yes! A wonderful aspect of the Clean & Lean Revolution community is that the members can access it from anywhere! For example, my husband and I are tr..."

"Working with Angela and has brought back health and well-being to my life after unknown and undiagnosed serious food allergies caused major health tro..."

"Love the work that Angela is doing! It's essential and impactful. Thank you Angela!..."

"I have tried SO many diets and failed in the past. There are so many weight loss plans, quick fat loss diets that may work temporarily but then you re..."

"The Clean and Lean Revolution will set you on the path towards life-long health. Angela is so knowledgeable and makes choosing healthy options everyda..."

"Thank you for your support and expertise. Since I joined the quarterly Challenge, I have lost eleven pounds in eleven weeks. More importantly, for th..."

"Hi Angela..Just wanted to tell you thank you so much for all that you do. So far I am down 22 pounds and feel better than I have in a long time. I hur..."

"I’ve lost 120 lbs in 13 months!! I started working one on one with Angela last year. Then I transitioned over to the membership to use as a maintenanc..."

"I lost 5 lbs the first week that I removed gluten. I was hoping that gluten wasn’t an issue for me. After the program I tried bringing gluten back in ..."

"I’ve lost 47 lbs since Jan 1st and 8 dress sizes. This is the only plan that I have ever stuck with. I feel like I am not dieting. The weight is just ..."

Itchin' to Get
Clean & Lean?

Group Program Not Your Thing? Work One on One with Functional Medicine Nutritionist Angela Pifer!